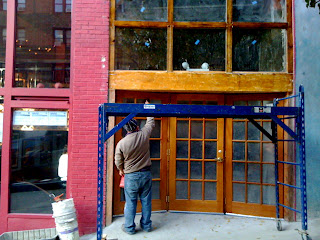 Expansion efforts seem to be going well at Le Cheile! Previously boarded up, the new entryway is revealed. The word is that this adjacent space will include games like Pinball machines. We think this is a great idea, something that's taken hold in other areas of the city (i.e. Brooklyn) but not uptown. Our guess is that it will be another popular addition to 181st Street.

We're also pleased to report that Le Cheile received an A on their restaurant inspection.

Email ThisBlogThis!Share to TwitterShare to FacebookShare to Pinterest
Labels: Eats