While walking home from grocery shopping yesterday afternoon, our attention was grabbed by local resident, June Frances Coleman, who was set up on 181st & Cabrini with her amazing homemade pies. 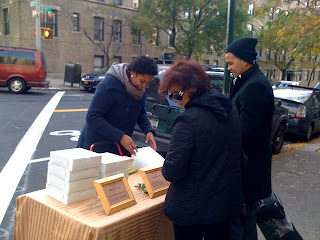 June was offering samples of the pies. In a clever move, rather than cut up pieces of a whole pie, she's created a miniature pie cookie - a penny-sized portion of her signature crust, which is closer to a shortbread cookie (delish!) with a dollop of filling. Brilliant!! Personally, I think she's got another great product there: Pie Cookies. How amazing would that be?!

Last night I hosted a small dinner party and served the pumpkin pie. It was well received - a fun twist on a classic. Sadly, we ate it before I had a chance to snap a photo.

If you'd like to order a pie for Thanksgiving, you must get your order in by TODAY! You can reach June at 212-696-6799 or jboccasionals@earthlink.net. Tell her that Hudson Heights Gazette sent you!
Posted by Melissa Moschitto at 1:32 PM

Email ThisBlogThis!Share to TwitterShare to FacebookShare to Pinterest
Labels: Eats