Yet another storefront on 181st west of Ft. Washington is poised for vacancy.  Metro Art & Frame is moving to the UWS as of the end of October.

The frame store joins a growing number of vacant storefronts which include the former location of Holy Moses Ladies Wear (on the same block) and the space next to 181 Cabrini. 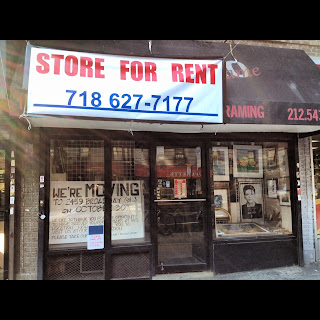 Passing by the former dress shop, a father was recently overheard asking his young son, "What would you like to be in there? Would you like a toy store?"


What kind of businesses would YOU like to see on 181st Street?  Leave your suggestions in the comments section!

Posted by Melissa Moschitto at 7:17 PM