I spoke to Ruddy Thompson of Thompson Development Group last night about the company's stalled condominium project at Overlook Terrace and 183rd Street.  Mr. Thompson, gregarious and unreserved in his comments, shared a lot of details about the large condominium project, its financial backers and what went wrong.  The details are too much for this blog, but here is the essential story.  After the collapse of Lehman Brothers in 2008, the project's key lenders pulled the plug on further spending.  This decision is somewhat mystifying given that the developer had already spent one-third of the $95,000,000 to plan the project, excavate the site and shore up the Hebrew Center.  Moreover, the market for family-sized apartments in Hudson Heights has remained very strong.

Mr. Thompson is now busy selling units in his newly completed condominium building at 231st Street in Kingsbridge.  But he pledged his commitment to One Bennett Park if the financing can ever be unfrozen.  Unfortunately, that looks very unlikely in the short term as the lenders are now involved in litigation with eachother.  Until that is resolved, we are likely to have nothing but a hole in the ground. 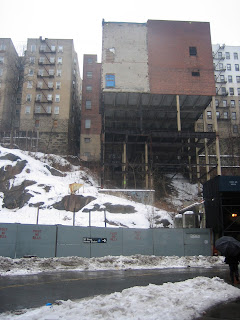 Posted by Hudson Heights Gazette at 9:45 AM