Walking around the quiet streets of Hudson Heights, the "Occupy Wall Street" protest taking place in the shadow of the World Trade Center site (photo below) may seem light years away.  But the economic crisis is all around us.  Statistics on poverty, unemployment and race suggest that working-class neighborhoods in Upper Manhattan have suffered disproportionately in the economic recession. 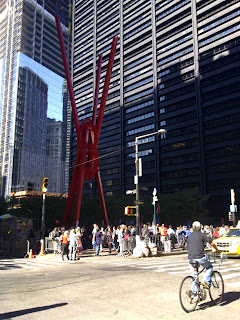 While poverty has risen in New York City to 20.1%, it is at least 25% in zip codes 10033 and 10040. The change is startling when compared to 2000-2008, when all but one city neighborhood registered declines in poverty rates.  More troubling is that 30% of people under 18 in New York City live in poverty.  This statistic is particularly significant in Upper Manhattan, which has twice as many residents under 18 as other parts of Manhattan (see prior blog entry on the 2010 census).

Unemployment in New York City has recently declined to 8.3%--a point better than the national rate.  But the unemployment rate in Upper Manhattan is at least 14%.  Also significant are the racial disparities in city-wide unemployment rates as recently calculated by NYC comptroller John Liu:  4.4% for asians, 5.2% for whites, 13.3% for hispanics and 15.3% for blacks.

Judging from the robust attendance at this month's local job fair, organized by politicians and nonprofits, there are a lot of un- and under-employed people in Upper Manhattan.   Their frustration is beginning to boil over.  On Saturday, protesters staged an "occupy" protest at the Chase Bank on 181st Street and Saint Nicholas Avenue (photo below). 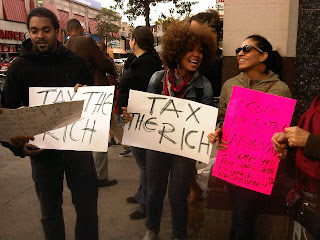 The spike in property theft in Upper Manhattan in 2011 is undoubtedly related to these economic trends, particularly unemployment among young people.

The one bright spot in economic data for Upper Manhattan is real estate, where prices seem to be stabilizing. Prices are down about 20% from the peaks of the mid-2000s.  But real estate closings were up 46% in the first quarter 2011 over the same period in 2009, which suggests that low prices and low interest rates are luring buyers north.  And, compared to other major cities in the United States, there are relatively few foreclosures in Upper Manhattan.   This author's recent search of foreclosure websites revealed only one advertised foreclosure sale in Washington Heights.  This is probably due in part to the careful screening that cooperative buildings apply to prospective buyers.

(The data above was compiled from recent stories on the Real Deal, DNAinfo, N.Y. Times, Gotham Gazette and other sources.)
Posted by Hudson Heights Gazette at 12:27 PM

Email ThisBlogThis!Share to TwitterShare to FacebookShare to Pinterest
Labels: News