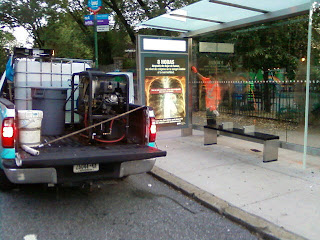 CEMUSA, a Spanish company that builds and maintains street furniture in NYC and around the Americas, is doing a great job.   A few years ago, the company won the exclusive right to build and maintain bus shelters, newstands and other "street furniture" in the Big Apple.   The contract from the city was highly sought after because of the advertising revenues from the furniture.

One morning this week, while headed to the A train stop at 190th Street, I noticed that someone had thrown orange paint on the bus shelter across from the subway.  On my way home from work that evening, CEMUSA had its cleaning crew there, removing the paint from the shelter.  The city was never that efficient.

Kudos to CEMUSA.  I think we should license the subway system to them.

Email ThisBlogThis!Share to TwitterShare to FacebookShare to Pinterest
Labels: Photo of the Week