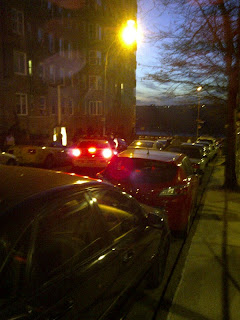 Police took away a burglar from Cabrini Boulevard and 187th Street at approximately 7:30 p.m. tonight (in squad car above). The man was apparently apprehended after a standoff with police.  The building superintendent spotted the man entering apartment "2k" and notified police. 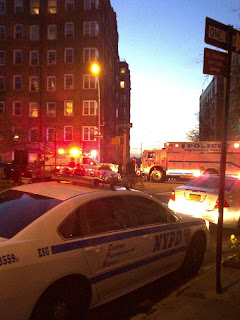 Dozens of police officers joined in the effort to capture the burglar, leading a one-hour standoff.
UPDATE: DNAinfo.com reported that the man taken into custody is not a suspect in the "vaseline" burglaries.  All the more reason to take additional precautions and stay aware!!
Posted by Hudson Heights Gazette at 8:06 PM