On your morning commute today, you may have noticed that the 181st Street and Fort Washington Ave intersection was unusually busy.  (This was amplified for me by one very impatient driver who insisted on leaning on his horn because traffic wasn't moving fast enough.  He waved to me cheerfully as I gave him a puzzled/aggravated look).

Turns out the hubub was caused by filming for a new TV show, still in its pilot phase: Gotham. 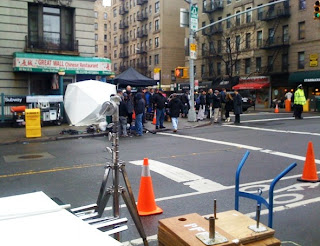 According to IMDb, the show "focuses on a female detective who stumbles across a magical world that exists within New York City while investigating an "impossible murder."  The show will star Lennie James as a mayoral candidate and recent NYU grad, Megan Ketch as the detective, Annie.

The show will be filming in the neighborhood until 10PM so you might catch a glimpse of them on your way home tonight.
Posted by Melissa Moschitto at 1:12 PM

Email ThisBlogThis!Share to TwitterShare to FacebookShare to Pinterest
Labels: Photo of the Week