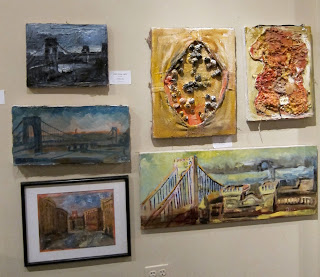 Many of the pieces are large scale and all are defined by their use of three-dimensionality.  As we were looking at some of the pieces, a young girl came over to point out details that might have been lost to a wandering eye.  For example, when the artist finishes a tube of paint, it doesn't go into the trash - it becomes part of the piece, adding texture and depth.  She also revealed that she had donated some of her jewelry collection to a 3D collage piece.  Sure enough, upon closer examination we could see the beads and a ring transformed into a foreign landscape.

Our guide turned out to be the artist's young daughter, who is also a frequent subject of his work.

Navahjo Stoller - also known as Navi - is a local resident and also owns and operates Navi Times, a real estate firm specializing in Northern Manhattan.  At the opening, many local residents and families attended.  Navi noted that this was the ideal way to open his exhibit - in the community that he lives in and works for.

The art will be on exhibit until the end of the year. Don't miss it!

Do you have other ideas for local artists who should be shown at the Artspace?  Leave your suggestions in the comments!

Posted by Melissa Moschitto at 10:56 AM