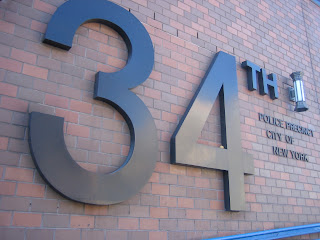 Update:  On February 20, 2011 Jo Craven McGinty published an article in the N.Y. Times about gun ownership in New York City.  According to McGinty there are 37,000 licensed handgun owners in the five boroughs.  This represents only a fraction of the guns circulating in the City (i.e., most guns are not licensed.)  Check out his article The Rich, the Famous, the Armed.

In 2010, the number of homicides in New York City was 23% higher than 2009 levels, up to 532 deaths.  In December 2010, Manhattan District Attorney Cyrus Vance summed up the problem:  easy access to illegal handguns, especially by young people.  While the number of murders in the 34th Precinct was up modestly from two in 2009 to four in 2010, other northern Manhattan precincts, particularly Harlem, had much bigger jumps.  This blog entry is an attempt to provide some basic background on the subject of illegal handguns in New York City, why the problem is likely to persist and why it is relevant for Hudson Heights.

National Support for Gun Rights.  The recent shooting of U.S. Representative Gabrielle Giffords has refocused media attention on the easy access to guns in the United States, including those sold legally and illegally.   The shooter, Jared Lee Loughner, was by all accounts extremely disturbed yet had little trouble buying a handgun and a "high capacity ammunition clip" in Arizona.  Some politicians, including former NYC mayor Rudy Giuliani, attribute the problem to the lack of proper treatment for the mentally ill in the United States.  Others, like N.Y. Representative Carolyn Maloney, linked the shooting to easy gun access in the United States and have supported a bill in Congress to ban these types of ammunition clips. The prospects for any genuine fire-arm control in Washington, however, seem low given the level of partisan conflict.


Two recent U.S. Supreme Court decisions are likely to favor those opposing stricter federal or state gun control laws.  In a profound ruling in 2010 in McDonald v. Chicago, the U.S. Supreme Court ruled that the Second Amendment of the U.S. Constitution protects a fundamental right to bear arms.  Previous court rulings had suggested that the Constitution simply protected the right of states to form militias like the N.Y. State Guard--no longer. Instead, Justice Alito wrote: "It is clear that the Framers . . . counted the right to keep and bear arms among those fundamental rights necessary to our system of ordered liberty."  This extends the Court's 2008 ruling in District of Columbia v. Heller that "the Second Amendment protects a personal right to keep and bear arms for lawful purposes, most notably for self-defense within the home."  In other words, the nation's highest court believes citizens have a fundamental right to possess a gun.


While these court rulings make it clear that outright bans on individual ownership of guns are unconstitutional, there is still room for the federal government and states to impose necessary restrictions.


While homicides have risen in New York City in 2010, the number of illegal handguns seized has remained constant over the past decade, from 5,000-7,000 each year.  What is disturbing, however, is the growing number of very young offenders.  This includes 20-year old Juan Rivas of Yonkers who was arrested last year for selling 25 illegal handguns to NYPD officers in transactions in New York City and Westchester County.  This case underscores the reason the Manhattan D.A.'s deep concerns, which is where this story comes back to our neighborhood.  Some of Mr. Rivas' gun and drug sales took place at Sherman and Isham Streets in nearby Inwood.