Composting, Some Background and An Idea

According to the U.S. Environmental Protection Agency, yard and food waste comprise about 25% of household garbage.  Placing these materials in the municipal waste stream is not only a "waste" of useful organic material, its costly.  New York City pays up to $100 per ton to dispose of its wastes. And the City's residents (NOT including its businesses) produce up to 14,000 tons per day of household waste.  That adds up to $1,400,000 in daily costs to dispose of our wastes in landfills in OTHER states, mostly outside the Northeast.  These costs per ton don't include the salaries of NYC Department of Sanitation workers or the carbon emissions associated with trucking all that waste around the country.  Its no wonder that the NYC Department of Sanitation has been keen to increase composting in the Big Apple in the past decade.

There are, however, only a few City-run collection centers, which can be found at the City's composting website: http://www.nyc.gov/html/nycwasteless/html/compost/operations_sites.shtml.  The closest locations to Hudson Heights are at Inwood Park and Sherman Creek.  I've never visited either location.  The Cornerstone Center on Bennett Avenue has a modest compost that is open to the public.  But based on my recent visit (see photo below), its not much in use this winter. 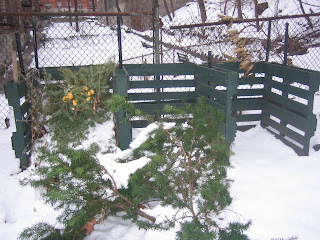 The good news is that composting units are small and relatively inexpensive--anywhere from $50 and up.  Units like the one shown below are common in the suburbs and are raccoon proof.  (Of course, that doesn't mean they're NYC-rat proof). 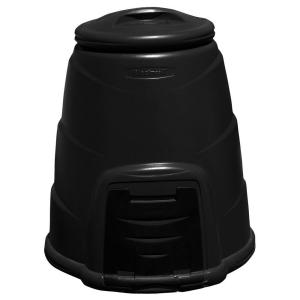 The bad news is that you need an unpaved, discrete garden location for these units--where waste can decay without offending the eyes or noses of passersby.  Collegiate Church at 181st and Fort Washington Avenue might be a good location.  Or perhaps co-op or rental buildings with some backyard space can begin composting.  How about a building "compost club" where residents can pay $5 to join and utilize the building's compost bin?

Email ThisBlogThis!Share to TwitterShare to FacebookShare to Pinterest
Labels: Environment